Be the first to review this product
$229.00
Out of stock
SKU
EMT 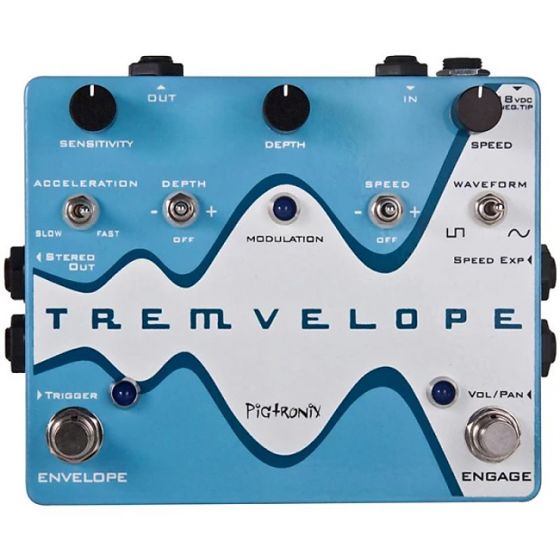 Tremvelope is a tremolo pedal that allows the dynamics of your playing to change the speed and depth of the effect. The result is an intuitive, all analog sound that takes a classic stompbox concept to a whole new level.Tremvelope is versatile. With the envelope switched off, you get a high fidelity optical tremolo with stereo panning outputs. Tremvelope’s fat sounding audio path is modulated by an LFO with SPEED, DEPTH and WAVEFORM controls.When the ENVELOPE is switched on, the tremolo is influenced by what you play. The SPEED and DEPTH knobs can each be assigned to increase or decrease in response to the strength of the signal coming from your instrument. These changes in SPEED and DEPTH start from where the knobs are set and independently move in the direction assigned by the user.The ACCELERATION switch adjusts the response time of the tremolo to changes in your playing and the SENSITIVITY knob provides control over the amount of increase it takes to create changes in the tremolo settings. Expression pedal inputs for speed, and vol/pan add external foot control to this animated beast of a pedal. There is also a TRIGGER input for running the Tremvelope late in an effects chain but still allowing your clean signal (or even a different instrument entirely) to control the envelope directly.Tremvelope achieves a stimulating state of sonic flux by altering both speed and depth in sync with what you are playing. The resulting psycho-acoustic effects are sometimes reminiscent of the Leslie rotating speaker cabinet, whose signature sound is most pronounced when the rate of its speaker’s rotation is changing. The continual changes in rate and depth achieved by the Tremvelope are highly interactive with the musician. Since the Tremvelope is sensitive to what you play and you are sensitive to how your music sounds, there is an instantaneous feedback between the motion of the tremolo and your motions on the instrument. Go forth and modulate!Features: