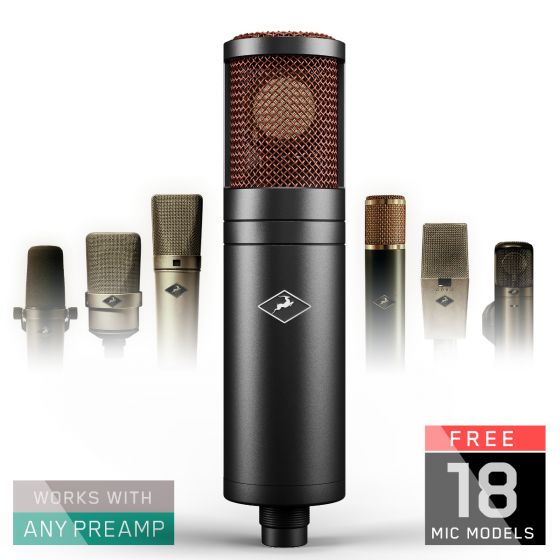 A Legendary Library
Edge Duo is able to call on an extensive and ever-expanding collection of classic mic emulations, with 11 legendary microphone models already available and 7 more soon to be released. All have been meticulously measured from carefully selected original examples in one of the most respected facilities in Germany. Find the full list of Edge Duo emulations below.

Unique Design
Housed in a specially designed low-resonance body with a sleek matte black finish, Edge Duo features a 6-micron gold-sputtered dual-membrane capsule. It provides an incredibly smooth, rich and organic response that the powerful Antelope Audio modeling engine can shape into the true sound of some of the most expensive and sought-after microphones in the history of audio recording.

Multi-Dimensional Mic Modeling
Edge Duo’s dual-membrane capsule design feeds two separate XLR output channels via the included Y-cable. The signal from each membrane is then individually processed and recombined, delivering the most precise mic modeling on the market. This approach not only means that users can vary the polar pattern from within the plug-in, even after recording. It also allows the Edge Duo to accurately emulate the characteristic on- and off-axis response of each mic for true multi-dimensional mic modeling.

High Compatibility
The Edge emulations are designed to work hand-in-hand with Antelope’s own precision mic preamps and converters. For maximum accuracy, Edge Duo can be used with any of Antelope Audio’s mic preamp-equipped interfaces, whose built-in FPGA processing capabilities allow real-time vintage mic emulation.
However, Edge Duo also includes Antelope’s native mic emulation plug-ins, meaning you can use any third-party audio interface and even change modeling settings after recording. Available in VST, AU and AAX formats for both macOS and Windows, Antelope’s native AFX plug-ins* provide everything we’ve come to expect from their industry-leading FPGA FX, with minimal latency, a high degree of oversampling and precise floating-point calculations.

*iLok 2 or 3 required. Not included in the pack.